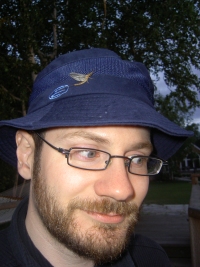 Hello, I'm James Wright. I am an Assistant Professor at the University of Alberta. I also hold a Canada CIFAR Artificial Intelligence Chair and am a Fellow of the Alberta Machine Intelligence Institute. Previously I was a postdoctoral researcher at Microsoft Research in New York City. I completed my Ph.D. at the University of British Columbia in 2016, advised by Kevin Leyton-Brown.

My primary research interest is in using data-driven machine learning models to predict human strategic behavior; that is, behavior in interactions where each participant's rewards depend partially on the actions of other participants. My long-term research agenda is to build a general theory for optimally designing algorithms for mediating interactions involving humans or other realistically bounded agents rather than idealized, perfectly rational game theoretic agents.

My academic CV is available as both an HTML page and a PDF document. I also have a public Google Scholar citations page.

Prospective M.Sc. students who are not currently enrolled at the University of Alberta, please do not contact me directly. Instead, apply to my department and indicate an interest in working with me. I am likely to take on new Ph.D. students from outside U of A only when I am familiar with their publications in my area. I am likely to take on other students for an M.Sc. with the possibility of continuing to a Ph.D.

For students who are already at U of A, please take my grad class if you are interested in working with me.